Coptic Orthodox Churches are elaborate and ornate. One of the first things you will notice is an abundance of icons. Icons are written in very specific style which is used universally within the churches, they are deliberately made to look unrealistic to differentiate the icons from idols to avoid worship or prayer to the image itself. In between the congregation and the altar lies a large iconostasis, representing a line between Heaven and Earth. Along the top row of the iconostasis are icons of the twelve disciples, six on the left and six on the right of the Last Supper. Above the iconstasis is Jesus on the cross with to St. John the Beloved and St. Mary on either side. Underneath the apostles and the Last Supper are a few icons which can vary from church to church but usually consists of St. Mark, St. Mary with an infant Jesus, Jesus’ baptism, Archangel Michael and the annunciation to St. Mary by Archangel Gabriel. 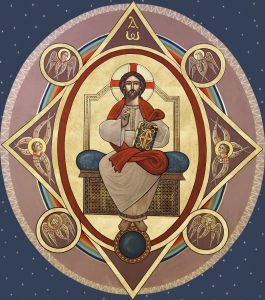 Where the Altar stands, there is a large icon of Christ Almighty or in Greek, “Pantocrator” with the four heavenly creatures surrounding His throne as told in the book of Revelation. The image is accompanied by the Greek letters Alpha “A” and Omega “W” because Jesus said he was the Alpha and Omega, meaning the beginning and the end. 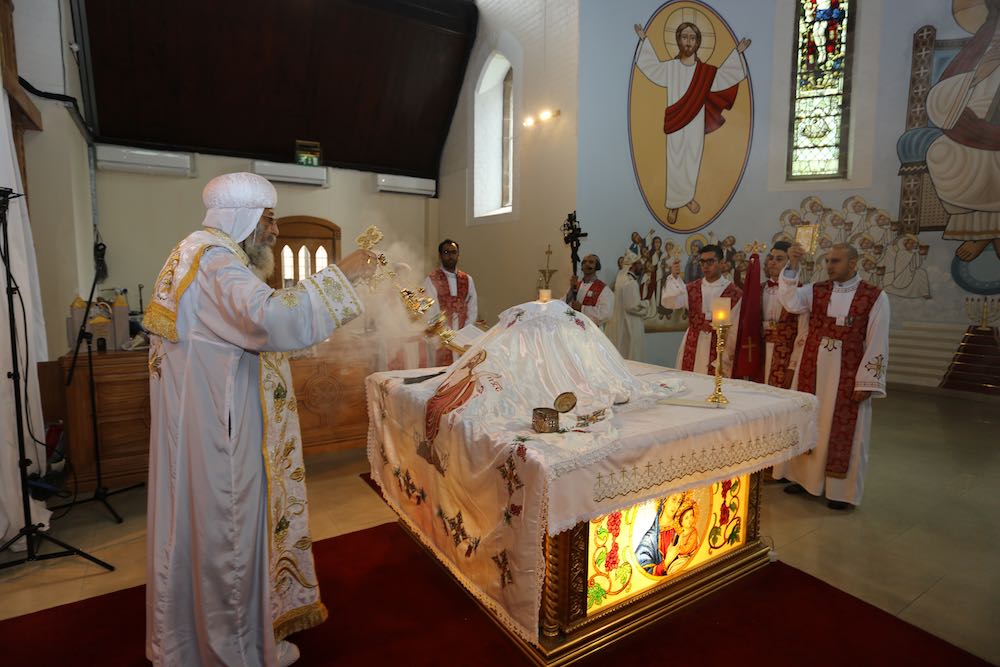 The Clergymen performing the Divine Liturgy will use a censor which contains incense made up of myrrh, burned on charcoal to create a fragrant smoke; when the priest is raising this incense smoke in the air it is representing people’s prayers and supplications to God. During the mass, the priest shakes the censor towards the saints’ icons representing a pleading for intercessions. Men and women are aligned at separate parts of the church and when going beyond the iconostasis, shoes must be removed just as Moses was commanded, “Take your sandals off your feet, for the place where you stand is holy ground.” (Exodus 3:5).

Hymns are unique and deep in meaning. They have been transmitted orally over the centuries, some hymns taking their musical tunes from Ancient Egyptian melodies. The hymns of the church change throughout the year depending on the season e.g. sad tunes are used during the Holy Week and joyful tunes are used on feast days. The only liturgical instruments used are the cymbals and triangle which are primarily for aiding the faithful in maintaining a unified tempo.