7th January 2014
Papal Message
His Holiness Pope Tawadros II
Pope of Alexandria and Patriarch of the See of St. Mark

In the Name of the Father, the Son, and the Holy Spirit, One God, Amen.

I congratulate all of you for this glorious Feast of the Nativity and the new year of 2014. I wish upon all of you the blessings that come with the birth of the One Who was born in the manger; blessings of goodness, joy, peace and love for everyone in Egypt, and in all our churches throughout the world, all who celebrate the New Year by the birth of our Lord Jesus Christ.

The incarnation of God is an event that combined the earth with heaven. God, through His love for mankind, was incarnated and came to mankind. As we learn from the verse that is often referred to as “the little gospel”, (John 3:16) states: “For God so loved the world that He gave His only begotten Son, that whoever believes in Him should not perish but have everlasting life.”
This meeting of heaven and earth was a meeting from God, Who gave us His love, by coming down from above to mankind. This was also a meeting from man who showed his eagerness of going up to God. This meeting happened in the fullness of time, as stated in the Holy Bible, and, in the womb of our mother the Holy Virgin St. Mary where He was incarnate by His love.
In the creation of man, God showed His love to everyone. In His incarnation, He confirmed this love. In His crucifixion and resurrection, the Lord concluded this great love toward man. In fact, in the story of the Nativity, we have plenty of contemplations. We read about the heavenly star, and we read about the earthly manger.

But the world at the time of our Lord Jesus Christ was classified into two main groups, Jews and gentiles. And there was a separation between heaven and earth. Heaven is full of angels and heavenly creatures, and the earth is full of people who were divided into Jews and gentiles. In the birth of our Lord Jesus Christ, those three groups came together.

First, the shepherds who were awake arrived. Those shepherds were very simple people, and were from the simplest sector of the Jewish society. Their work and efforts were in the wilderness with the flock that they used to shepherd, and out of those sheep, the sacrifices were selected to be offered.

The shepherds were always traveling and did not have a place to dwell. Even their witness were invalid in courts. But the Lord had chosen them for their honesty and simplicity. God wanted to honor them, so He revealed to them His birth by the angel who appeared to them saying: “I bring you good tidings of great joy which will be to all people.”

The awakening shepherds were Jews. As if God had chosen the shepherds to represent the Jews. The reset of the world were considered pagan gentiles. As such, God had chosen the worshipping magi on behalf of the gentiles. They came from far countries in the east. They endured the long travel. The roads were not like what we have now. They were scientists in astronomy, and in predicting events that may happen.

They traveled for long periods, coming from far countries to search and worship the birth of the King of the Jews. We all know the story, but the most important points were that they reached their goal and they were considered high class in their society. They arrived to Jerusalem, to the place of the manger where the Baby Jesus Christ was, and offered their gifts.

By their gifts, they expressed their eagerness to witness the born, King of the Jews. Therefore, the earthly world came to the manger to the Lord Jesus in two groups, in addition to the third group which was from the heavenly world represented by the multitude of singing angels.

The angels were singing the famous song: “Glory to God in the highest, And on earth peace, goodwill toward men.” Everyone was presented in the manger and around the Lord Jesus Christ. The earthly world was presented by the two groups of the Jews and the magi, and the heavenly world presented by the angels.

What we are most interested in and what I would like to put before your eyes is the fact that the magi who came from the far countries presented gifts to Him: gold, frankincense, and myrrh. Most of us know that gold is a symbol of being a King; frankincense is a symbol of His priesthood; and the myrrh is a symbol for His suffering and crucifixion.

These gifts signify those characteristics of our Lord Jesus Christ. The question here, why did they choose those gifts specifically? We all know that the gift is offered according to the taste of the giver and according to the condition and position of the receiver. So why did they choose those gifts? I would like to tell you that those gifts which were offered by the magi symbolize the life of man.

The life of man throughout its entirety is characterized by gold, frankincense, and myrrh. I mean every one of us through life has days of gold, days of frankincense and days of myrrh. The days of gold are the days of success, good health, victory, wealth, and days of comfort, as well as all days of joy either at work, business, various successes, or study. Each are considered the gift of gold.

The gift of frankincense presents the days of work, study, labor, hard effort and services, and other days that take large space in the life of man. The days of myrrh, as the life of man should have time of myrrh according to this philosophy of the gifts, presented by the days of grief tribulations, need, suffering, illness, and all the days in which man aches from negative emotions and anxiety.

The birth of our Lord Jesus Christ gives us hope, courage and new life in a new vision for our daily life. I congratulate all of you, all clergy, congregations, and families. I would like to especially congratulate our youth and children. I congratulate every church with her board, servants and deacons. I ask the Lord to give you grace and to fill your life with the joy of Nativity every day. May our life be for the glory of His name, and glory be to God, forever, and ever. Amen. 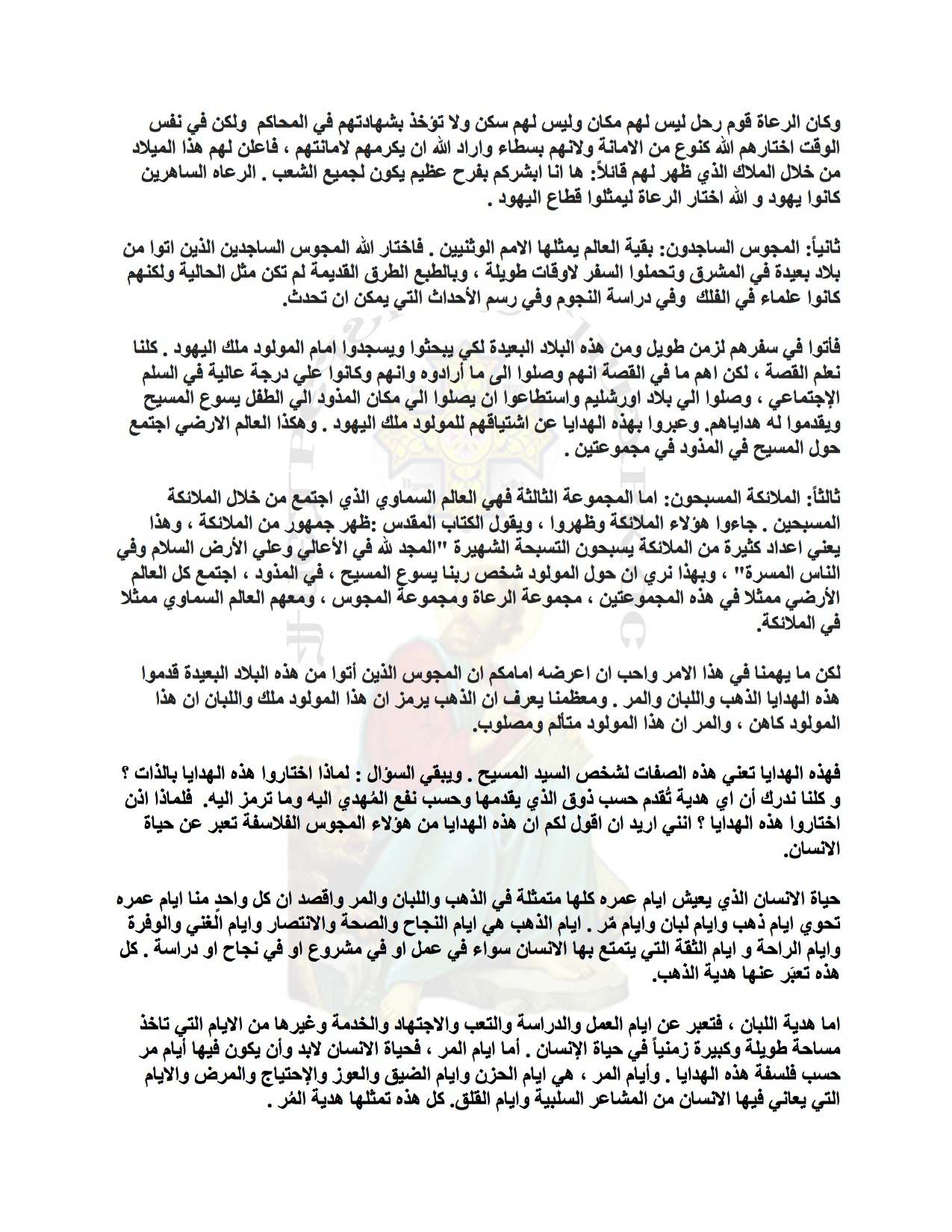 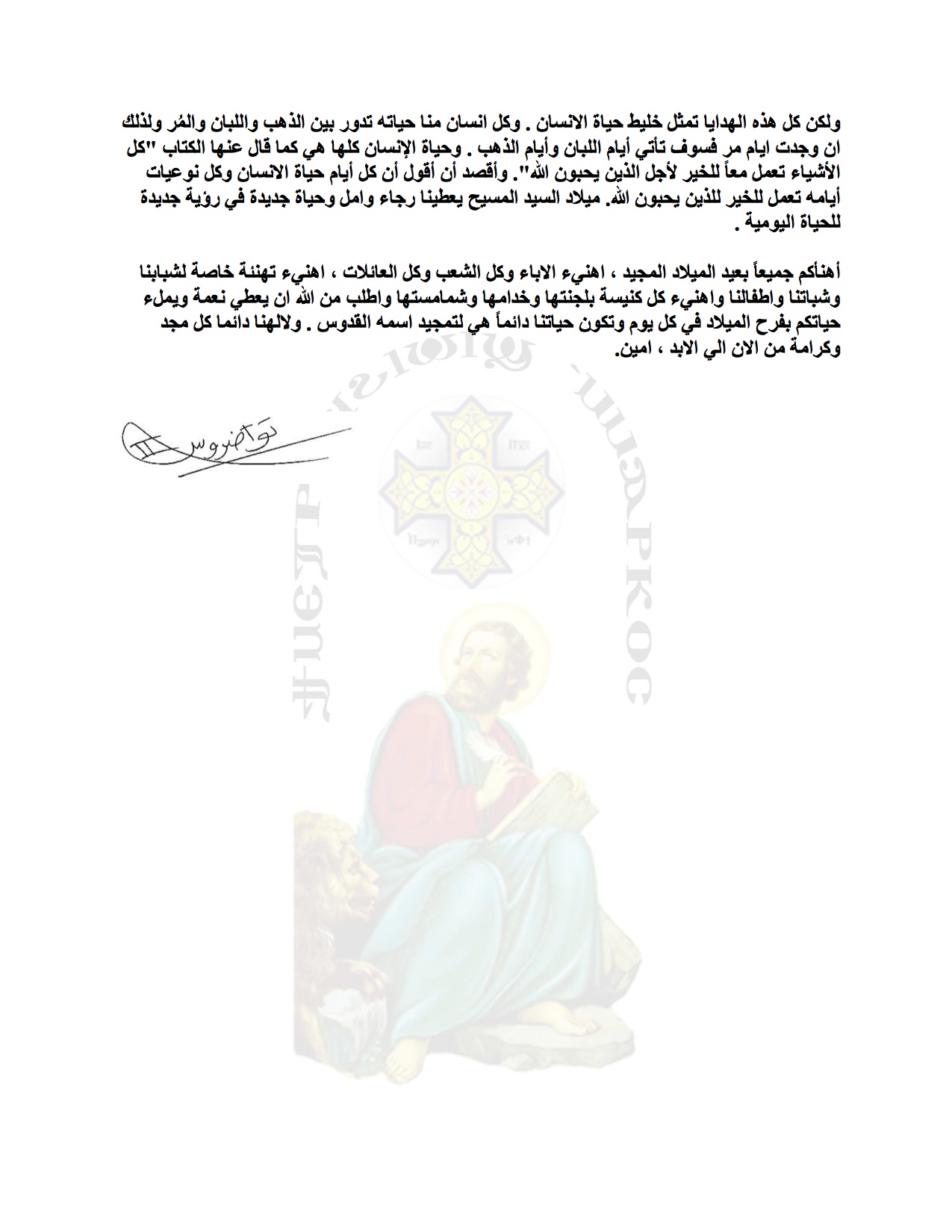