Meditations Upon The Glorious Feast of the Epiphany 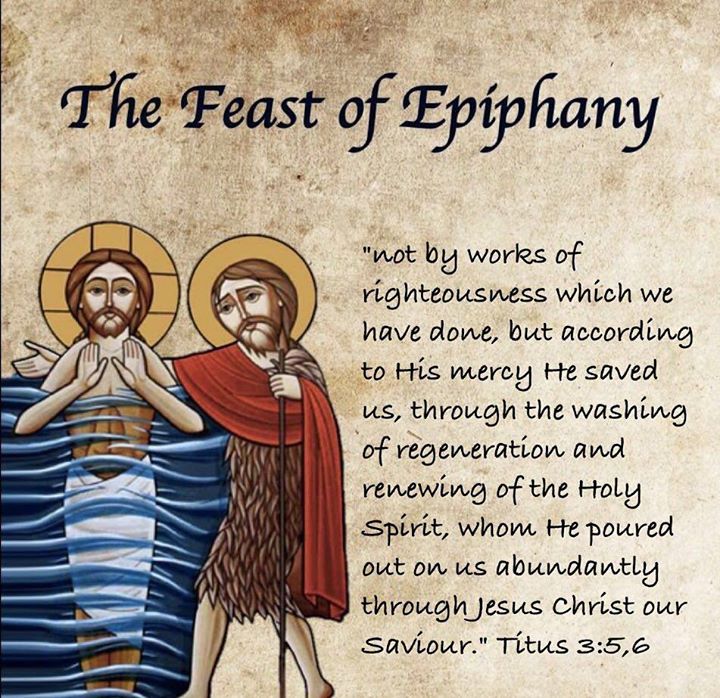 Meditations Upon The Glorious Feast of the Epiphany

The month of January brings to us several feasts: the beginning of the new year, the Nativity, the Circumcision, the Epiphany.

We thank God who gave us the blessing and the efficiency of all these feasts, in our lives.

While we celebrate the glorious feast of the Ephiphany, we are glad to stop sometime for meditation:

The feast of Epiphany is the feast of Baptism … This feast is also called the feast of the divine manifestation (the Theophania) because the Holy Trinity appeared in it:

The Son is baptised, The Father says from heaven: “This is My beloved Son, in whom I am well pleased”, and The Holy Spirit appears “like of a dove” (Matt. 3: 16-17). Hence the baptism of the Lord Christ shows the creed of the Holy Trinity.

Thus the baptism is always in the Name of the Holy Trinity, according to the word of the Lord to His disciples before His Ascension: “Go therefore and make disciples of all the nations, baptizing them in the name of the Father and of the Son and of the Holy Spirit” (Matt. 28:19). He did not say in the names, because the three are one, as it was mentioned in (1 John 5:7): “For there are three that bear witness in heaven: the Father, the Word, and the Holy Spirit; and these three are one”.

It is well that the Church has called this feast: “Eed El Ghetass”, or the feast of the Immersion, (in Arabic: Eed means feast, and “El Ghetass” means immersion).

Because in it, the Church reminds the people that the Lord Christ was baptized by being immersed, as it was said that after being baptized, “When He has been baptized, Jesus came up immediately from the water” (Matt. 3:16). The Church also reminds the people that the faithful in the New Testament are being baptized by being immersed, (and not by being sprinkled with water, as it is done in some communities). The Ethiopian eunuch was baptized in this manner, at the beginning of the apostolic era, at the hands of Philip: “Now when they came up out of the water, the Spirit of the Lord caught Philip away” (Acts 8:39).
Also because Baptism is a tincture, (Baptisma in Latin), and tinting is accomplished through immersion; and because Baptism is a burial with Christ (Col. 2:12), and burial is accomplished through placing inside the tomb (immersion), and cannot be represented by sprinkling with water ……

Likewise in all the ancient vestiges, we see that baptism was accomplished inside a recipient that was called the baptistery.

That proves that baptizing was accomplished through immersion, and not by sprinkling water.
We remember, during this feast, many spiritual and doctrinal meanings, whether as regards the baptism of the Lord Christ at the hands of John the Baptist, or as regards the importance of Baptism in the Church…….

We remember also that the Lord came to the baptism of John, while He was not in need of it.
But that was in order “to fulfill all righteousness”, so that He would be without blame before men, even while He is not in need. That also establishes before us the principle of obedience and the principle of loyalty, without asking what profit it is to us?

Many of His actions were for the others and not for Himself. He took our place to present to God the Father an image of the perfect man, who satisfies the Father by His life, as well He satisfies Him by His redemption of the human kind.

In His baptism, we remember his humility …..
We remember His love and His fidelity, and His tenderness in His conversation with John, when He says: “Permit it to be so now”.

The baptism of Christ also reminds us of our baptism , and of the care of the Church for Baptism.
Baptism is the first sacrament of the Church, and is the door through which we enter to the other sacraments.

We say vulgarily: “we have christianised so and so”, that is: we have batptised him; because he has become a christian through baptism. ….. That is an expression which is sound in its doctrinal meaning, and which reminds us of the word of Christ: “He who believes and is baptized will be saved” (Mark 16:16).

Therefore the day of baptism is a feast as regards the child and his family.
In that day, the Church gives him three sacraments: Baptism, Confirmation, and Eucharist also; and makes him ready to participate in the life of the Church. He becomes a member in it, and takes the first ecclesiastical certificate in his life.

The Church assigns a sponsor to the child, who will care for him spiritually, and very often it is the mother who is the sponsor to her child.

The mother is engaged before God and the Church to take care of her child in the fear of God, and to be his first teacher, who instructs him, and who gives him the practical training for all religious matters.

Extract from the book: The Epiphany & St. John the Baptist by H.H. Pope Shenouda III