The Joy of the Resurrection 2013

The Joy of the Resurrection 2013

5th May 2013
Papal Message
His Holiness Pope Tawadros II
Pope of Alexandria and Patriarch of the See of St. Mark

I congratulate you on the occasion of the Glorious Feast of the Resurrection, which is the Feast of all Feasts, the Joy of all Joys and the Delight of our lives. The Feast of the Resurrection comes after a long period of fasting; 55 days to be exact. This fast culminates in the Holy Week of Pascha, which is a period filled with prayer, fasting, and supplication. Subsequently, Great Friday arrives, during which we declare ‘I have been crucified with Christ; it is no longer I who lives, but Christ who lives in me’ (Galatians 2:20). Finally, Sunday, the Day of Light arrives… the Day of the Sun of Righteousness and the Resurrection of the Lord Christ from the dead.

I would like to talk to you about three stages or three scenes from the Resurrection.

The First Scene: (Exiting the Tomb)

The scene of the Lord exiting the Tomb: Of course, each of the scenes is true historically, but it also has symbolic, spiritual, and contemplative meanings. Christ rose through the power of His Divinity, exited the tomb, and death had no dominion over Him. Christ offered His Resurrection to all; This Resurrection therefore, is the First Breath. Through this First Resurrection, He granted to every person who believes in the Cross, life, and enjoy his share in the Salvation and Redemption of the Blood of our Lord Jesus Christ. The expression ‘Exiting the Tomb’ symbolizes leaving of the tomb of lust… the tomb of sin. For sin is like a tomb. When we read in the message of the apostle Paul to the Ephesians, chapter 5 verse 14, “Awake, you who sleep, Arise from the dead, And Christ will give you light.” ‘Arise from the dead’ signifies rising from the tomb of lust, from the tomb of sin. The sins mankind has faced throughout time, always appears pleasant. This appearance is deceptive; an outwardly appealing facade. While, simultaneously, it is brutal and destructive for man. Man can now say with the power of the Resurrection: ‘O death, where is thy sting? O grave, where is thy victory?’ (1 Corinthians 15:55) The First Scene therefore, is ‘Exiting the Tomb’, the tomb of lust.

The Second Scene:(Rising towards Heaven)

From ‘Exiting the Tomb’ to ‘Rising towards Heaven’: This is why Christ appeared many times on the day of His Resurrection; in the morning as well as the evening, and also throughout the forty days until our celebration of the Glorious Feast of the Ascension. In the Second Scene, ‘Rising towards Heaven’ the humanity in our Lord’s Resurrection, transcended earthly gravity, Earth was rendered ineffective; so too should we arise. Nothing hindered our Lord Christ in His Resurrection… neither shroud, nor darkness, nor fear, nor the boulder–nothing. So also we should not just discard sin, but we should yearn for the heavenly. St. Paul the Apostle said a very beautiful expression: “I have a desire to depart and be with Christ, which is far better” (Philippians 1:23). This desire, while on earth, is found in the man who constantly seeks that virtue of longing for eternal life. So the First Scene: Leave behind the tomb of sin The Second Scene: Long for the heavenly; Taste the beauty of heaven, and the earthly vanities will be worthless before me. One will have a spiritual life and spiritual sense, that overflows daily, making him look to heaven. This is commemorated every Liturgy when we say ‘You, who are seated, stand up’ and ‘Look to the east.’ That is the beautiful meaning in the Second Scene: our rising toward heaven.

The Third Scene: (Bringing the joy of the Resurrection to every person)

A scene that is also very beautiful. When Christ rose from the dead, as I mentioned, He appeared several times. In one of those times, He appeared to the two disciples of Emmaus the night of the Resurrection. Luke and Cleoppas were traveling on the road, and did not recognize the Risen Christ, but after He had left them, after the breaking of the Bread, they realized and exclaimed: “Did our hearts not burn within us?” (Luke 24:32). In other words ‘we sensed a special feeling in the presence of Christ but we are not able to express it, nor are able to describe it.’

I would also like to mention that the expression ‘the dead’ does not just mean those whose souls departed their bodies. ‘The dead’ has many important meanings in our discourse on the Resurrection. For instance, man can be dead in thought, his thoughts can be dead, this is exemplified in the person of Saul of Tarsus. He believed that what he did was a service to God, but at a point, when Christ appeared to him while he was on the road to Damascus, he discovered that this was not the correct path. He stood in front of Christ and asked Him: “What do You want me to do, Lord?” (Acts 9:6) “What do You want me to do?” Saul arose and was transformed from Saul of Tarsus to Paul the Apostle. Let us learn from Paul the Apostle, how he went to serve and work actively, thus becoming a giant of evangelism.

There is also another kind of death – spiritual death – he is alive and known, he comes and goes, but his spirit is dead. For example Zacchaeus, who thought happiness was found in money alone, this was his entire life. But when he met Christ, he rose from death and from the tomb of money that bound him. He rose and began to view things differently. His first act was to distribute half his wealth to the poor. Secondly, he said: “If I have taken anything from anyone by false accusation, I will restore fourfold” (Luke 19:8) Zacchaeus rose and was transformed from a sinful, greedy individual, to a saint and preacher in the name of Christ. A third kind of death, of course there are many kinds, but I will only talk about three, the third kind of death is death of the heart. So, death of the Spirit, death of thought, and now death of the heart. A dead heart is one that lacks emotion, one that is oblivious to sin. The closest example is that of Mary Magdalene. She was a sinful wanderer in the streets of Jerusalem, this woman was possessed by a dangerous enemy, the devil, but when she met Christ, she became a saint and an evangelist. She was the first person to witness and share the news of the Resurrection of our Lord Jesus Christ. She rose and she was transformed. To summarize, the Feast of the Resurrection is an opportunity, for every person to arise from anything binding him. The Feast of the Resurrection is an opportunity to rejoice, and we all know that we celebrate the Feast of the Resurrection for 50 days. These Fifty Days are considered as fifty Sundays. It is the joy of all our joys; it is our happiness and our pleasure. We live in the spirit of the Resurrection every day, in the morning, when we pray the Morning Hour prayer. The spirit of the Resurrection is also present every week on Sunday: ‘This is the day the Lord has made’ (Psalm 118:4), and every month we remember the Resurrection on the 29th day of the Coptic month, and every year during the Holy Fifty Days. 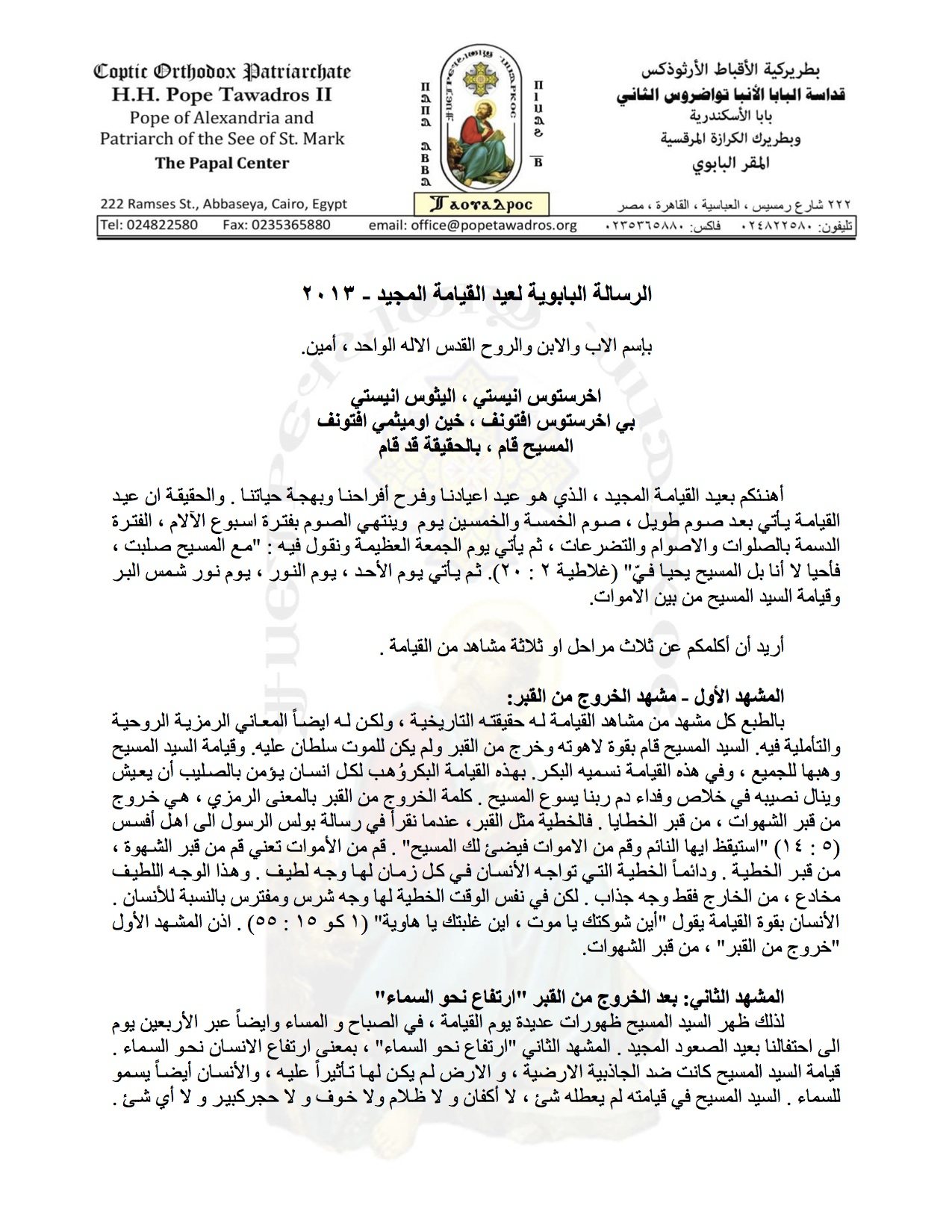 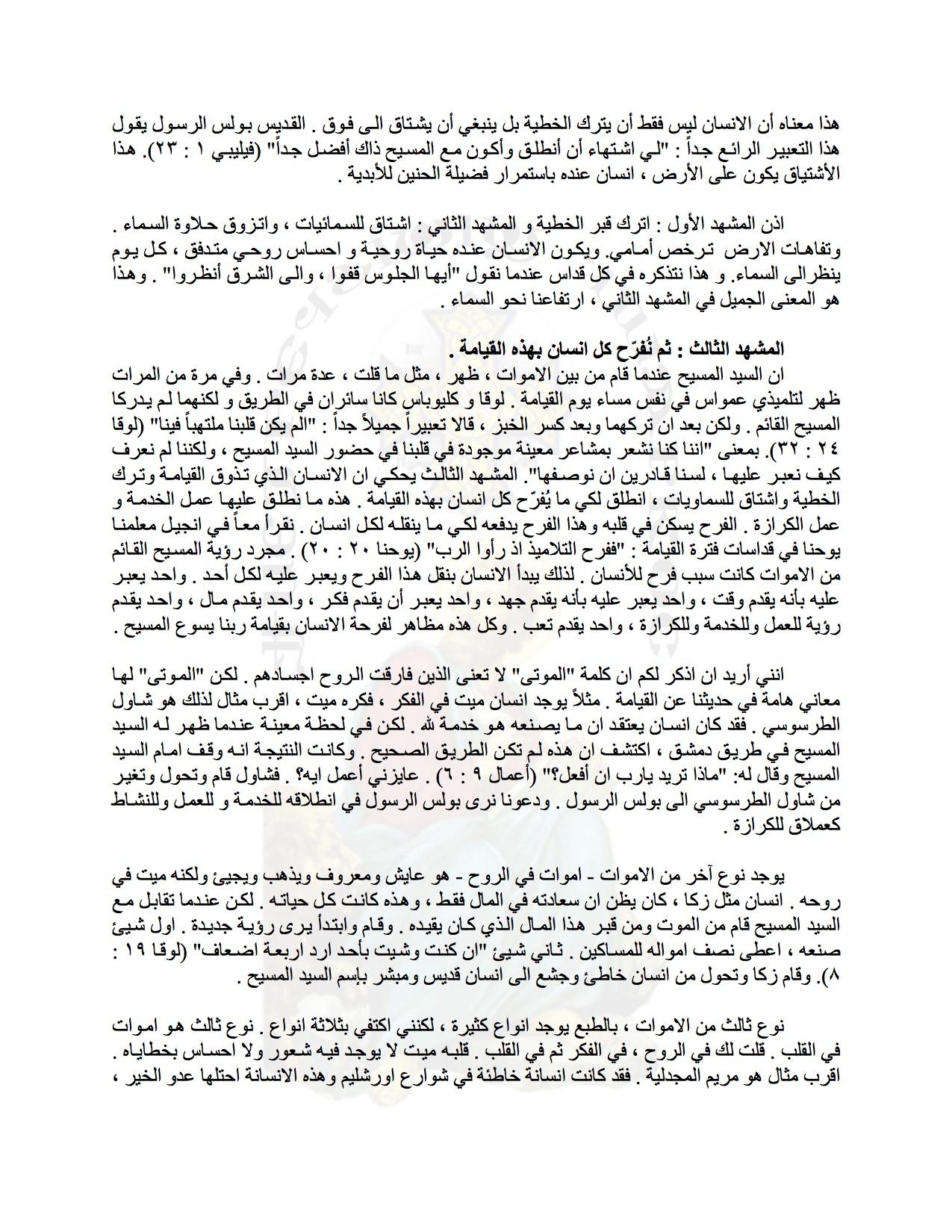 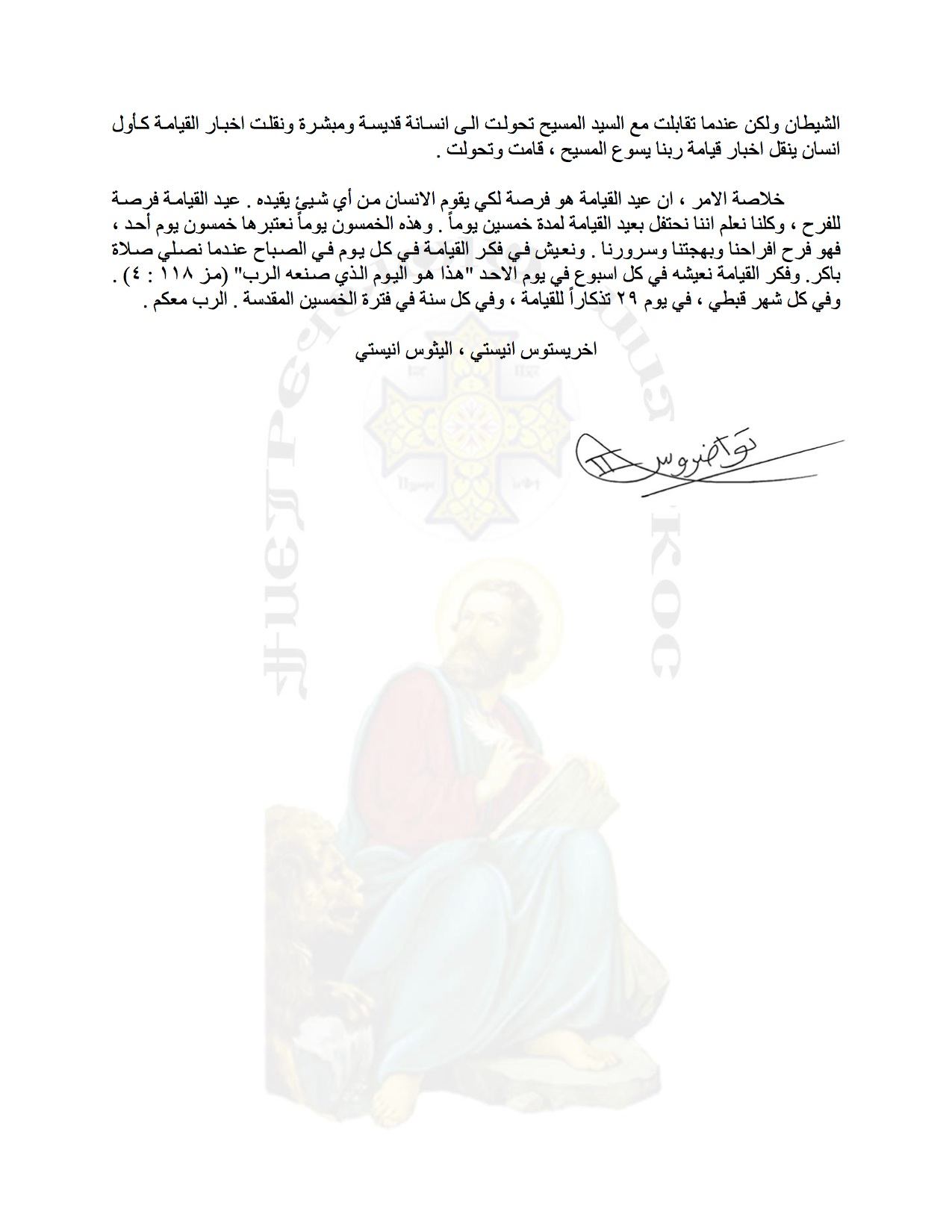