The Joy of the Resurrection 2018

The Joy of the Resurrection 2018

8th April 2018
Papal Message
His Holiness Pope Tawadros II
Pope of Alexandria and Patriarch of the See of St. Mark

In the name of the Father, the Son, and the Holy Spirit, One God. Amen.

We call it the “Feast of Passover”, meaning to pass from darkness to light. This is the night before the Resurrection Liturgy, the Apocalypse night, when we enter the church in darkness and conclude with the holy liturgy on the Bright Saturday in the light. We also call it the Feast of the Easter. This word is derived from the word “East”. It is an eastern feast, and the east is always associated with light. I also congratulate you by its third name, Sunday. It is the feast of Sunday, which means day of the light. This is the day of light, Feast of the Light.

In the various events of the glorious resurrection, occurring during the week of Pascha, we encounter several characters. The resurrection is the biggest event in the history of mankind and implants hope for humanity. We are faced with two types of people. One kind of human being causes pain while another implants hope. In the Arabic language, both words “Pain” and “Hope” have exactly the same letters, but are arranged differently. There are those who cause pain and suffering in the lives of men, and others who implant hope and optimism. The resurrection is the greatest earthly event implanting hope in men’s souls. Let us take some few examples.

When we read in the beginning of the New Testament, we read about King Herod. A man who caused pain. He was responsible for the killing of the children of Bethlehem. These were younger than two years old. His intent was to kill the child Jesus. He caused and nurtured pain that resulted in crying and lamentations that filled the land because of children’s slaughter. More examples of people who caused pain for men are the Jews who crucified the Lord Christ. The sufferings of crucifixion were enormous physically, psychologically and emotionally. They included the pain of mockery, nails, crown of thorns, and the cross itself. There were the screams of the crowd present, their wrath, insults, and harsh words directed to the Lord Christ on the cross. These extreme sufferings were inflicted by the Jews who crucified the Lord Christ. They culminated by the death of Christ on the cross. Another example of those who caused pain in the lives of men was Judas, the traitor disciple. He was a disciple selected by Christ, with his brothers the disciples. He lived among them, watched the miracles of the Lord Jesus Christ and listened to His teachings. But his inferior personality allowed him to compromise Christ with money, causing extensive pain by betraying and selling Him cheaply. This concluded by hanging and suicide.

These are examples of those who caused pain. There are many examples. Some people spread darkness the life of man, either darkness of mind, or darkness of heart. These cause failures in the lives of others, instill all kinds of fear, anxiety and financial struggles between people leading to violence and wars. Others may cause pain through stubbornness, rebellion, or aggression. Also, inject lies, rumors and doubts, that make others falter in despair. All those cause pain. They live without Christ.

The other kind of human beings are those who plant hope in the life of men. The resurrection of Christ was a strong event in planting hope. It is the condition upon which Christianity was established. Christianity is built entirely upon the resurrection of the Lord Christ. As “Nor is there salvation in any other,” (Acts 4:12). Look at Mary Magdalene who was a desperate woman, seeking her Christ and could not find him. The appearance of Christ, and His words to her restored her hope. She became St. Mary Magdalene, who carried the good tidings of the resurrection to the disciples and apostles. Look at the two disciples of Emmaus, they were walking by Jerusalem, and talking but they were both desperate. When the Lord Christ appeared to walk with them, He said to them “”O foolish ones, and slow of heart,” (Luke 24:25) and He restored their courage and hope. Observe the group of the disciples who were frightened and severely confused in the upper room after the crucifixion of Christ and His resurrection. While in this state and hopeless, Christ appeared to them. The Holy Bible says in John: “Then the disciples were glad when they saw the Lord.” (John 20:20). He implanted hope.

Let us say the greeting of the Resurrection, Ekhristos Anesti, Alithos Anesti. Christ is risen, Truly, He is risen. 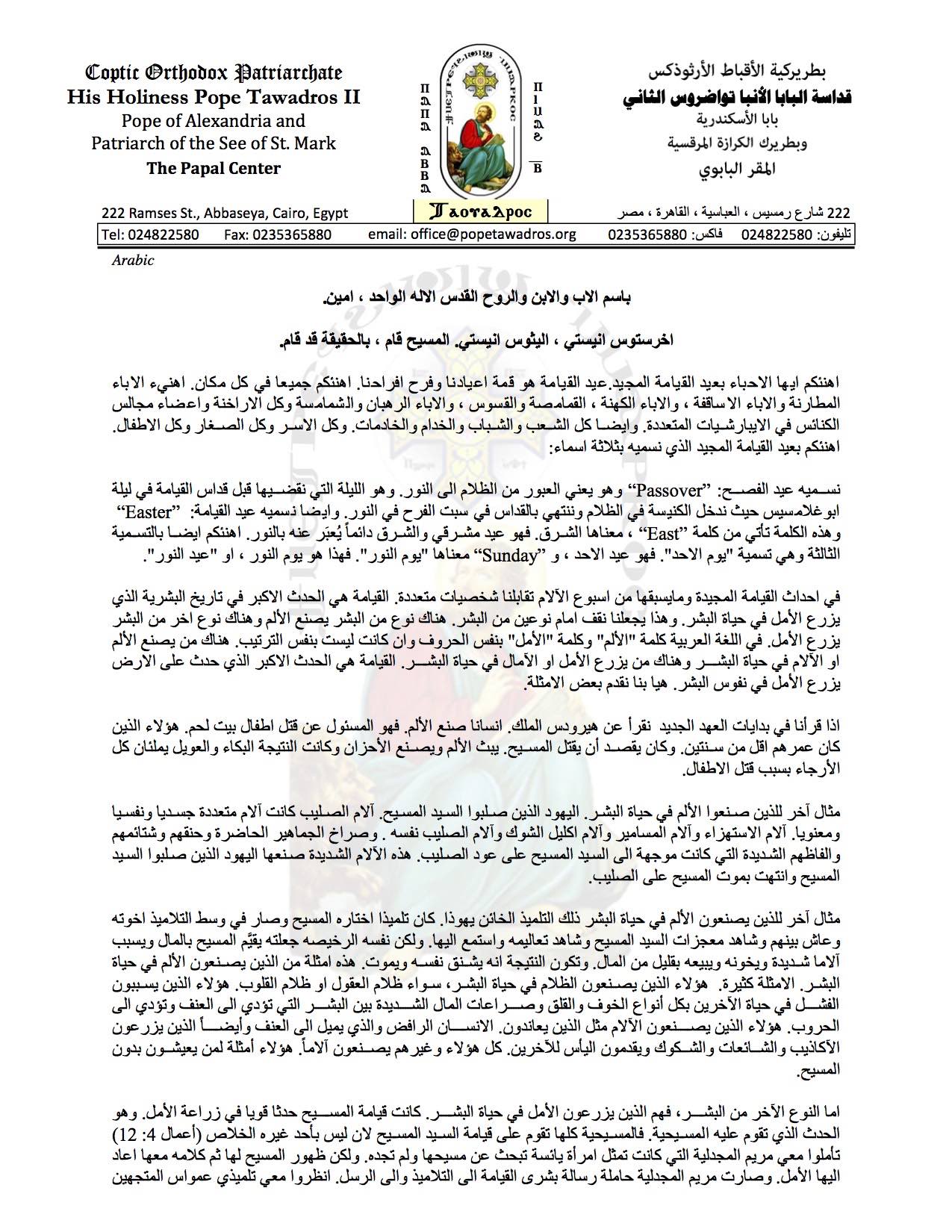 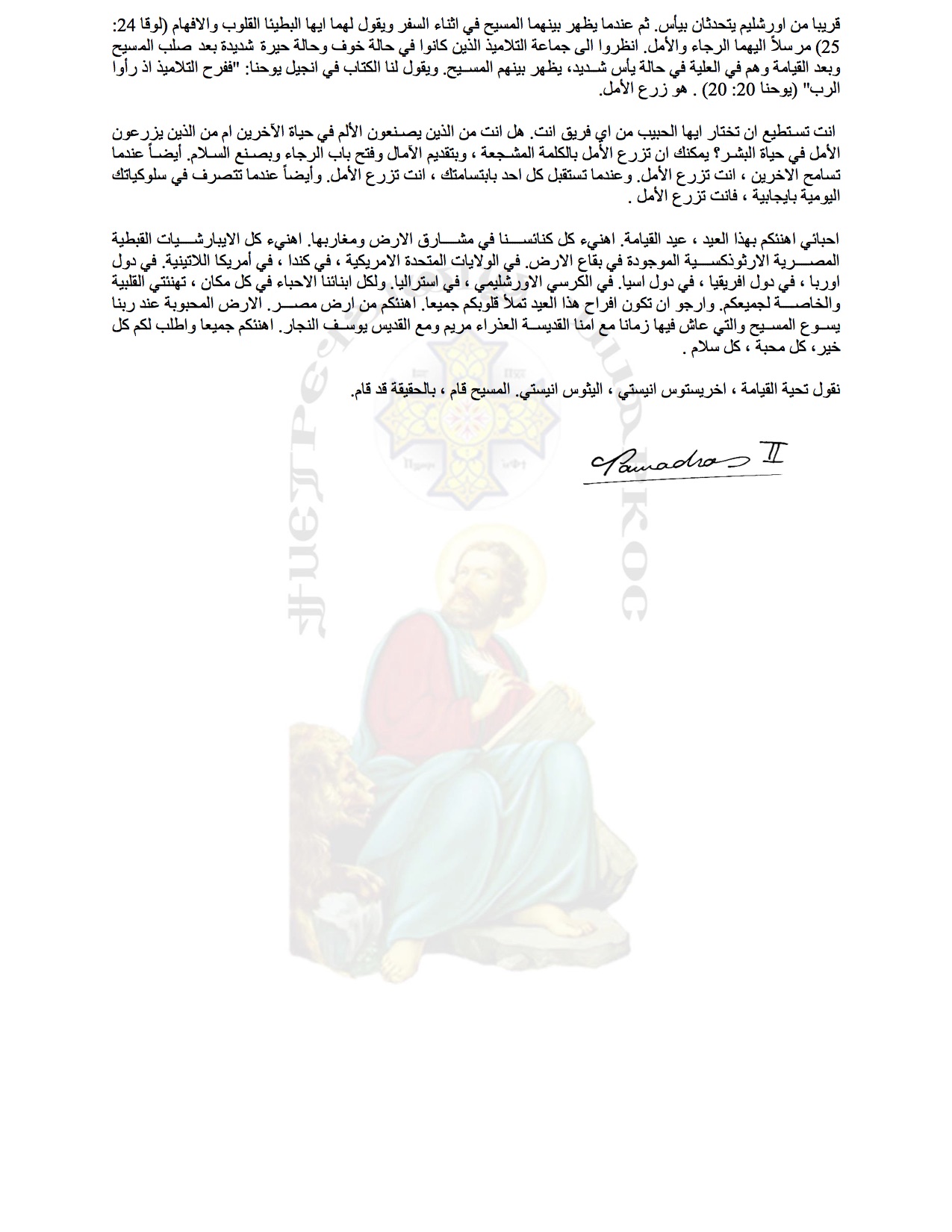