7th January 2015
Papal Message
His Holiness Pope Tawadros II
Pope of Alexandria and Patriarch of the See of St. Mark

In the Name of the Father, the Son, and the Holy Spirit, One God, Amen.

I congratulate you, my beloved, for the Glorious Nativity feast and beginning the New Year of 2015. I hope you to have a new year full of blessings, goodness, love, joy and peace. In fact, I am so happy to communicate with you through this message—to all the beloved at every Coptic Orthodox Church all over the world, every family, all youth, all servants, the board of the church, all children, and all brethren.

When God created humanity, He intended them to be in continuous communication. He wanted them to be the crown of creation. After creating all things first, He created the King of all creation on earth. Man, having the breath of God, was the great creation of God. But sin came and humiliated him and cast him away from what God planned for him. Since the sin of Adam and Eve, our first parents, humanity came into struggle with all aspects of sin in their lives. There are three main weaknesses that dwelled in humanity as a result of original sin.
The first is Dominance by the Ego. The ego of the human being became his own god or idol. Man began to worship his ego along with power, desires, and all that resulted therefrom. When we look to the world, we find that the dominance by the ego takes various forms. Man’s ego became his god.

The second weakness that human beings fell into is the Abuse of Nature and Each Other. Thereafter, wars, disputes, and violence entered the world through this sin. We are reminded of early humanity—the story of Abel the righteous, who was killed by his brother Cain, despite the minimal number of humans alive at this time.

The third debility is the Absence of the Spirit of Joy, which was replaced by fear. Thus, man became a fearful being. Humans worry about everything, even themselves. Sometimes humans fear each other, animals, insects, even microorganisms. They dread nature, such as earthquakes and volcanos. They are apprehensive under certain circumstances and various events. They even are anxious about different stages of their lives—their childhood, adolescence, and youth. When humans reach adulthood and form families and have children, they still remain frightful.

Sin existed in these three forms of weakness—dominance by the ego, widespread violence, and consuming fear.

But God willed to heal and renew humanity through His birth and incarnation. “For God so loved the world that He gave His only begotten Son that whosoever believes in Him should not perish but have everlasting life” (John 3:16). The Incarnation of our Lord Jesus Christ was the remedy for these three weaknesses. The angels sang the following song on the day of His

glorious birth, which presented three therapies for three infirmities. The angels sang this song which was pleasing to the whole earth, saying: “Glory to God in the highest, peace on earth, and goodwill toward men” (Luke 2:14).

The three remedies are: 1) The glory of God in the highest, which is the ideal cure for egoism. 2) Peace on earth, which is the antidote for the violence that prevailed in the world. 3) The third solution is goodwill (joy) toward men. The spirit of joy overcomes any fear in the lives of human beings.

Human beings’ self-focus made them forget about God and praising Him. Humans also forgot that communication with God is what fulfills them, and instead worshipped their own egos. Man began to worship technology. Through the development various devices and social networks, the world has become so small and humans rely on themselves instead of God. Now comes the glorious Nativity of Christ to remind us that God’s glory is “in the highest.” We cannot treat our infirmities unless we communicate with God who created us. This communication should be through a sound spiritual life with all its various aspects.

The second weakness—widespread violence—should be treated by making peace, as mentioned in the Beatitudes. “Blessed are the peacemakers, for they shall be called sons of God” (Matthew 5:9). Making peace is the most difficult task on the face of the earth. Blessed is the man who makes peace in his life, community, country, and with others.

The third malady—fear—which became engrained in humanity cannot be overcome except by great joy. This joy results from the birth of our Lord Jesus Christ for the sake of humanity. When the angel appeared, he said: “Do not be afraid, for behold, I bring you good tidings of great joy which will be to all people” (Luke 2:10). This great joy enables the removal of fear from the life of humanity. There is a thin line in the New Testament during the time of our Lord Jesus Christ’s incarnation. This thin line is the line of joy that overcomes every fear in the life of humanity. This great joy became the measure of a healthy spiritual life for human beings. Humans are unable to rejoice and conquer fear unless they become closer to God. As long as humans are in a state of estrangement, they are unable to feel true joy continuously.

The song of the angels on the day of the birth of our Lord Jesus Christ is the ideal remedy for these three weaknesses in the life of humanity. The weakness of egoism is overcome and treated by praising the Lord. When you praise the Lord in your spiritual life and fill your heart with His fear, you will be able to control your ego and not be overcome by it. When you make peace in your family, your service, your work, your church, and in your community, you can eliminate violence. When you are filled with the spirit of true internal joy, this joy will overcome all these weaknesses. And through repentance, every sin will be cast out.

May the blessing of the glorious Nativity be with you all, with the Church and Her blessed congregation, all Her servants, children, and youth, and with all who continuously labor in serving the vineyard of the Lord. I convey to you the greetings of the Mother Church in Egypt represented by: Her Fathers the Metropolitans and Bishops, the fathers the priests, the fathers the monks, the mothers the nuns, the deacons and the entire congregation from the blessed and ever- protected land of Egypt. I congratulate all my beloved everywhere. Merry Christmas and Happy New Year to everyone. Glory be to God now and forever. 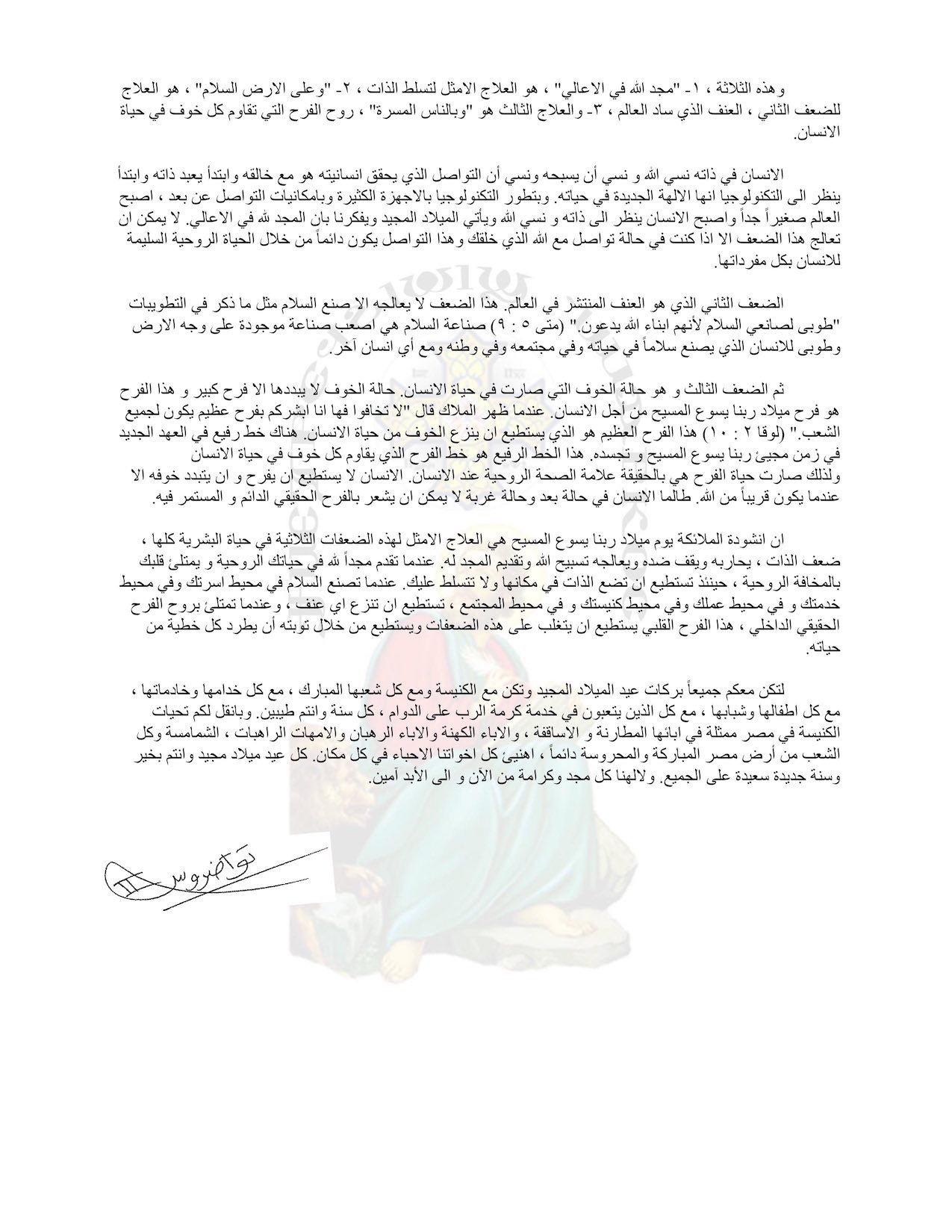