7th January 2013
Papal Message
His Holiness Pope Tawadros II
Pope of Alexandria and Patriarch of the See of St. Mark

I congratulate you my dear beloved children on this blessed Christmas, wishing you the blessings of joy, richness and peace in your life, work, and families from the Holy Born Baby in the manger -blessings. May all Christmas celebrations find you filled with peace in spirit and good health.

The incarnation and birth of our Lord Jesus Christ is one of the most precious events in the history of mankind. In this event we meet various aspects of God’s creation. For example:

Individuals: Joseph, Herod, Mary, Elizabeth and Simeon.
Groups: Jewish shepherds, foreign Magi and children.
Animals: in the manger and also in the temple offerings.
Heavenly hosts: angels, and the Archangel’s annunciation of the Birth of Christ
Towns: small towns such as Bethlehem, large cities such Jerusalem, and countries such as Egypt

Different titles: the carpenter, the king, the Virgin, the prophetess, the elder, and Emmanuel

It is indeed a very precious event, but we will choose three elements only:

Emmanuel is translated “God with us,” which is going to happen. In the book of Isaiah, It was prophesied seven centuries before happening. The prophecy states: “Therefore the Lord Himself will give you a sign: Behold, the virgin shall conceive and bear a Son, and shall call His name Emmanuel” (Isaiah .)7:14It is repeated again in Isaiah 8:8and Isaiah ,8:10and it has been fulfilled with the birth of our Holy Messiah (Matthew 1:23).

And this is what our Lord Jesus Christ expressed in His farewell prayer as He was just a few steps away from crucifixion when He said, “Father, I desire that they also whom You gave Me may be with Me where I am, that they may behold My glory which You have given Me…” (John 17:24). This shows that the meaning of Emmanuel goes beyond “God with us” to include that He longs for us to be with Him. So God became with us for an ultimate heavenly goal of being with Him too.

If we go back to the time of the annunciation to our mother, the Virgin St. Mary, when she was in Nazareth of Galilee, we see that Archangel Gabriel opened his message with the following words: “Rejoice, full of grace, the Lord is with you” (Luke 1:28). This salutation is a declaration of the life of great faith our mother, the Virgin Mary, lived. As she lived with God from all her heart, so God did become with her filling all her heart. Thus she gained her purity and honored status to be the pride of our humanity.

Therefore, we can consider this new name, “Emmanuel,” the beginning of the new testament in which God became with us, united in us and for us. And this new situation continues as we read the words of our Lord Jesus Christ in the Holy Gospel according to St Matthew as He says, “I am with you always, even to the end of age. Amen” (Matthew 28:20); a clear indication of the continuity of the new name, “Emmanuel,” in the life of man and in the church which is the Body of Christ with all its holy mysteries and its life unto the end of time.

2. The New Reality, the Incarnation

Our teacher St Paul says, “great is the mystery of godliness: God was manifested in the flesh,” (1 Timothy 3:16). From this we know that piety holds the secret to understanding the truth of God’s manifestation in the flesh. Incarnation is not simply a passing event that ended, but God manifested Himself in human flesh to save the long estranged man after the first fall which resulted from the disobedience of the parents of human civilization, Adam and Eve. As He is not subject to our fallen nature, but is rather the master of it, He entered humanity through His Divine Almighty power, born of a miraculous Virgin birth.

In this new existence, it became possible that God would dwell in man’s heart indeed. This is the privilege and pride of Christianity as it stands out as the religion in which the Creator meets the created, and through this union, God’s promise of salvation is fulfilled (Gen 3:15). When the fullness of time had come, after the long awaited fulfillment of God’s promise to Adam and Eve, the Virgin, the pride of the human race became the gift that the human race offered to God to be the lab of the divine unity and the point where heaven and earth, God and man, and the New and the Old testaments meet.

And thus we see a group of shepherds in their goodness, simplicity, and purity seeking the Incarnate God, an infant in a small manager, who becomes the focus of the whole creation including heavenly hosts praising, shepherds declaring their good news, wise men offering their gifts, the heaven with its bright star and the earth with its animals. He is with us; that is to say He dwelt among us, united Himself with the believers, and we received the blessings of being adopted as His beloved children. Accordingly, we call Him “Our Father” at all times.

God is Love. Out of His love he created earth from nothing and made man according to His image and His likeness. But man fell weak, was cast from paradise according to his own doing and was lost with no salvation. God did not create man to be condemned or to perish, but to be saved and have everlasting life (John 3:17). Toward this goal, God was incarnate. “For God so loved the world that He gave His only begotten Son, that whoever believes in Him should not perish but have everlasting life.” (John 3:16)

The Birth of Christ bestowed upon us a deep spiritual meaning that man had never experienced before. We were blessed to be adopted as children of God who believe in His Name (John 1:12). The Word, the Son of God, came to us and became the firstborn among many brethren (Romans 8:29).

This new depth given unto us through the birth of Jesus Christ is the beginning of the joyous journey of salvation and the ending of enmity between God and human race. Reconciliation has happened.

May our Lord Jesus Christ bless this world, and grant it true peace. With my sincere love to all of you I wish God’s blessings upon you every year. 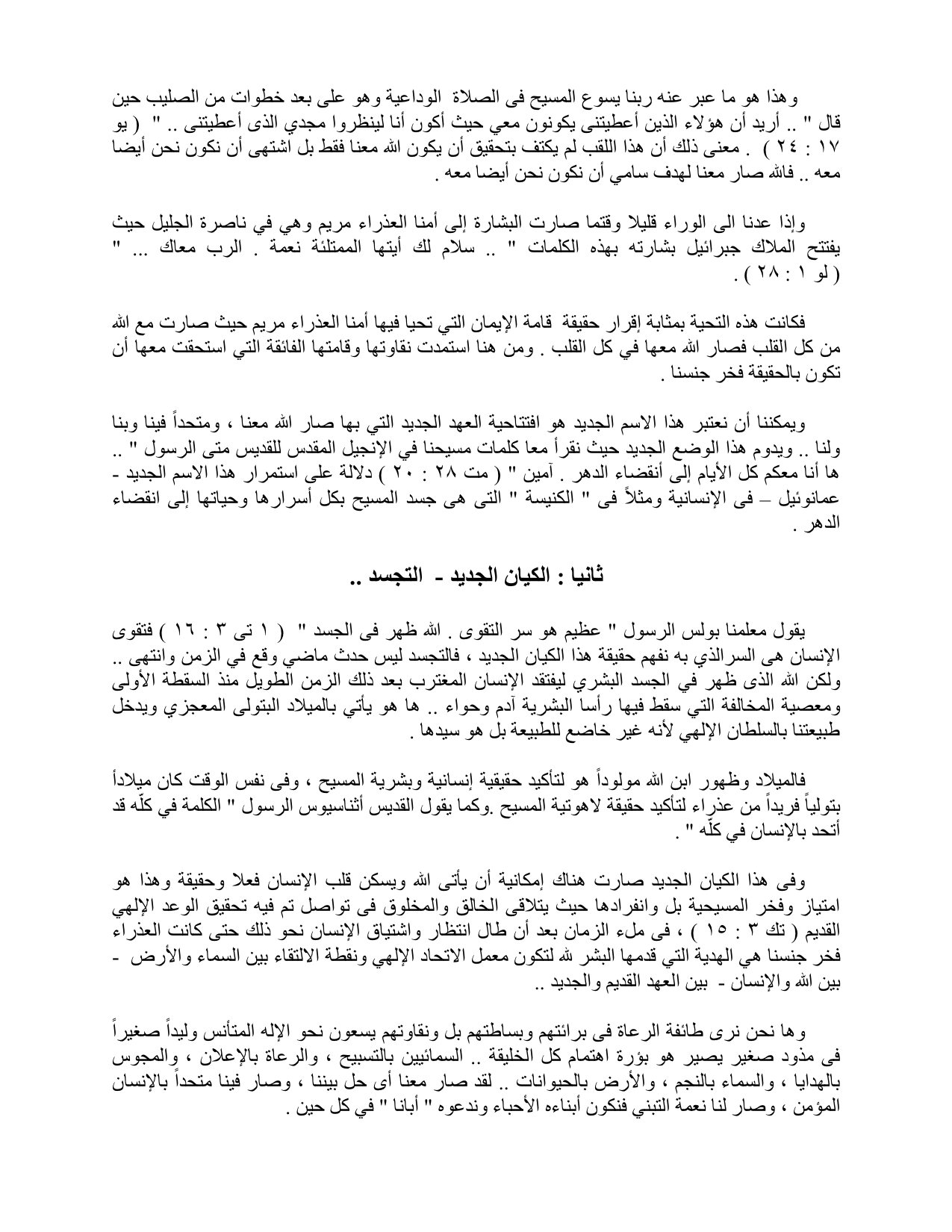 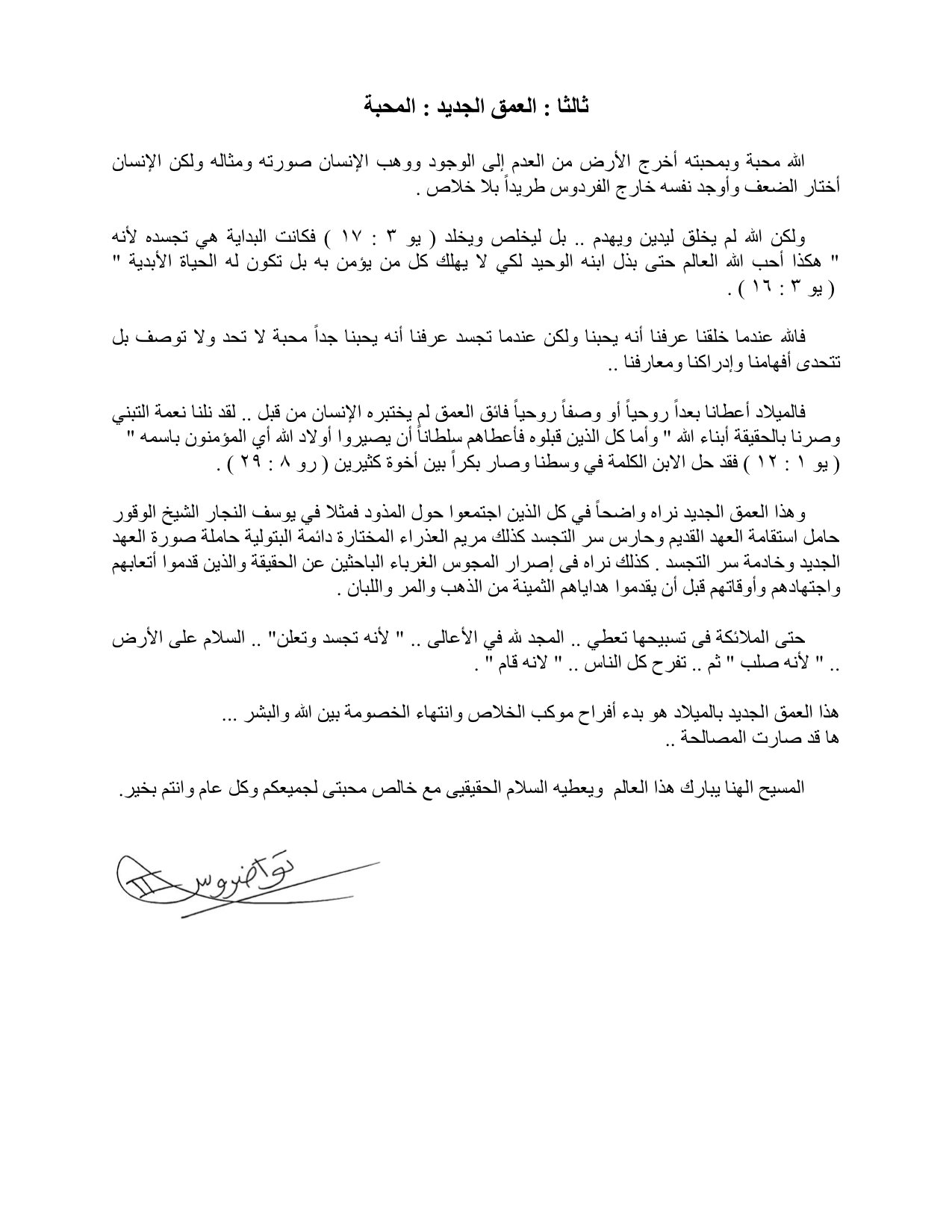