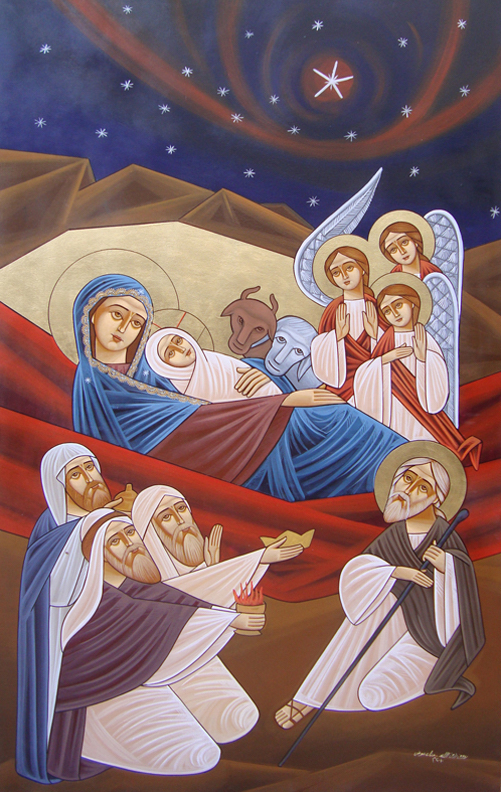 He was born, but He was born from eternity, He was born of a woman, but she was a Virgin: so, a Divinity and a Humanity were united, He has no father on earth nor a mother in Heaven. His Mother carried Him in her womb, but the Prophet knew Him while still in his mother's womb and he shook out of joy for the arrival of The Word, his Creator. He was wrapped in swaddling clothes but He came out of the shrouds at His Resurrection, He slept in a manger but the Angels glorified Him, a star announced His Birth and the Magi worshipped Him.

For the Jews, He had no appearance or beauty, but for David He was fairer than the sons of men, He glowed on the mountain brighter than the Sun, He was baptised as a human and waived the sins as a God. He was tempted being a human and won as He is the God, to have faith because He has overcome the world. He was hungry but He fed the multitudes, He is the Living Bread of Heaven, He was thirsty, but He cried out saying: "If anyone thirsts, let him come to Me and drink", He promised those who believe in Him, rivers of living water flow out of their hearts.

He suffered from tiresome, but He is the Rest of the tired and heavy-laden, He was sleepy and walked on water, He rebuked the wind, He saved Peter who was about to drown, He paid the tax but He got the money from a fish's belly while He is the Master of those asking Him to pay the tax.

They said: "He is a Samaritan and He is haunted", but He delivered the one who was coming down from Jerusalem and he fell between the hands of robbers. The devils knew Him and flew, they wanted to stone Him but missed Him. He prays, and answers the prayers of those who call upon Him.

He wept while He is the One drying the tears of those who cry, He asked where did they bury Lazarus, because He is a human, He revived him because He is a God. He was sold cheap, for 30 silver coins, but He bought humanity with the precious price of His Blood. He was led as a sheep to slaughter and He is the Shepherd of Israel and of the entire world. He became like a Lamb and He is the Word, a voice crying in the wilderness announced His arrival! He was sick and wounded while He is curing every illness and wound. He was lifted and crucified on the wood of the Cross, but He is giving us back our rights in everything, He was given vinegar and bitter, but Who is He? He is the One turning water into wine...He delivered His soul and He has the authority to get It back, at His death the veil of the Sanctuary was torn apart, rocks were broken, dead arose from the tombs.

He died while He is the One giving life, He destroyed death by His death, He was buried but He arose, He descended into Hades but He got out the souls of the righteous, He ascended into Heaven and He will come to judge the living and the dead and conflicts the evidence of the rogue!

(If there are verses in the Book leading you to astray, there is also other verses waiving astray, so we ask you in the Name of Christ, and we hope you reconcile with God, "do not quench the Spirit", or in other words, that Christ may reconcile you and the Spirit might enlighten your minds, and that the Spirit of Peace may conquer: through the Trinity, and for us to be steadfast, pure and without sin, till the appearance of Him Who is the subject of our hope, through Christ our Lord, glory be to Him forever and ever. Amen.] (St. Gregory the Nazianzen, Sermon 29: 19-21)

[What would I say? How do I talk? A miracle like that makes me stunned and can say nothing, the Ancient of Days became a Baby, He Who is sitting on the throne at the highest Heavens is lying in a manger, the Impossible was touched, the Simple, not complicated, The Ethereal, is touched by human hands.

He Who releases the bondages of sin is tied up in swaddling clothes, because He willed it, He has decided to turn lousiness into honour, to clothe shame with glory and to show that the borders of humility are the borders of power, and so, I can [accept] physical humiliation to be able to unite with the Eternal Word, He took my flesh and gave me His Spirit, and through giving and taking He is preparing for me the treasure of life. He took my flesh to sanctify me, He gave me His Spirit to redeem me.] (St. John Chrysostom, Homily 2 about Nativity, No. 2)

["And the Word became flesh and dwelt among us",  after St. John has said that those who believe in His Name are born of God, he explains to us that honour, which is inexpressible, and that is 'The Word became flesh' and that the Lord took the form of a bondservant, actually, He made Himself the Son of man while in truth He is the Son of God, to make people sons of God. When the highly seated One looks down at the lowly and ordinary, that would not harm His Glory by any means, His aim is to lift the despicable from his varmint, that is what happened with Christ when He came down from Heaven, nothing decreased of His Divine Nature, but He had rather promoted us to inexpressible glory, us, who were always in shame and darkness.

This is what happens when a king talks to a poor beggar in kindness and care, he is not destroying his honour at all, but rather makes the beggar an honourable, respectable person before others.] (St. John Chrysostom, Homily 11 on the Gospel of John)

2- Elimination of death and corruption because of the unity of the Word of God with the body, because the Word IS not subject to corruption, so he granted the body incorruption (that is why He arose from among the dead)

And so, the Word took our body, to redeem us and carry death instead of us, breaking its thorn and reconciling us with the Father through His Blood, participating with us in everything except sin, becoming our Brother and calling us to be His children saying: "Our Father Who art in Heaven", that is why it was essential for the Son of God to be the Son of man, thus "For many deceivers have gone out into the world who do not confess Jesus Christ as coming in the flesh. This is a deceiver and an antichrist." {2 John 1:7}.

"The Word of God was not limited in a Body, but He rather used the Body" - St. Athanasius the Apostolic

"God's power is able to perform wonders with you but it awaits your faith." - H.H. Pope Shenouda III #coptic #orthodox #genuine #faith

"God's power is able to perform wonders with you but it awaits your faith." - H.H. Pope Shenouda III #coptic #orthodox #genuine #faith